After making a few tasty Manhattans with an impulse purchase, Alessio Vermouth di Torino Rosso, we decided to have a bit of a taste test. Jason and I tried 4 vermouths on their own, and then stirred into Manhattans. We used Bulleit Rye for each Manhattan here. (Maybe we’ll do a post on the best rye for Manhattans soon.)

Vermouth is a fortified wine with botanicals, and was once used medicinally. Although it’s fortified, you should keep it in the fridge. (That’s somewhat unfortunate, since vermouth bottles would make a pretty addition to a liquor shelf). You can find a standard bottle for under $10, but three out of the four below are in the $20-25 range.

This bottle is produced by Carpano. The company claims the recipe was invented in 1786, and much like the formula for Coca-Cola, it’s a closely guarded secret. It’s known for its rich, spicy vanilla flavor. We thought it had quite a pronounced anise flavor which was too much for Jason on its own but we both enjoyed in the Manhattan. This is my favorite in a Manhattan (and a number of other cocktails) and I always keep a bottle around.

Also produced by Carpano, this recipe has been around since the 1860s. It’s actually a vermouth amaro, meaning it’s got some quina to bitter it. This was the most bitter vermouth we tried, and I enjoyed it in a Manhattan, although I typically use it in other cocktails.

This one was weaker in color and viscosity than the others, didn’t have as much of a discernible aroma, and its taste was sweet but not nuanced like the others. The Manhattan we made with it was fine, but nowhere near as tasty as the others. Although I don’t prefer it for a Manhattan, Dolin goes well in more complex cocktails where it’s not necessarily the star of the show — for example, I like it in a vieux carré. It’s also a lot easier on the wallet than Carpano.

Tempus Fugit, the company behind Alessio vermouths, is relatively new, but focuses on “historically inspired” liqueurs, absinthes and bitters. Their Vermouth di Torino Rosso is designed to be enjoyed on its own, and it’s great over ice with a twist. It was our overall favorite by itself and made Jason’s favorite Manhattan. 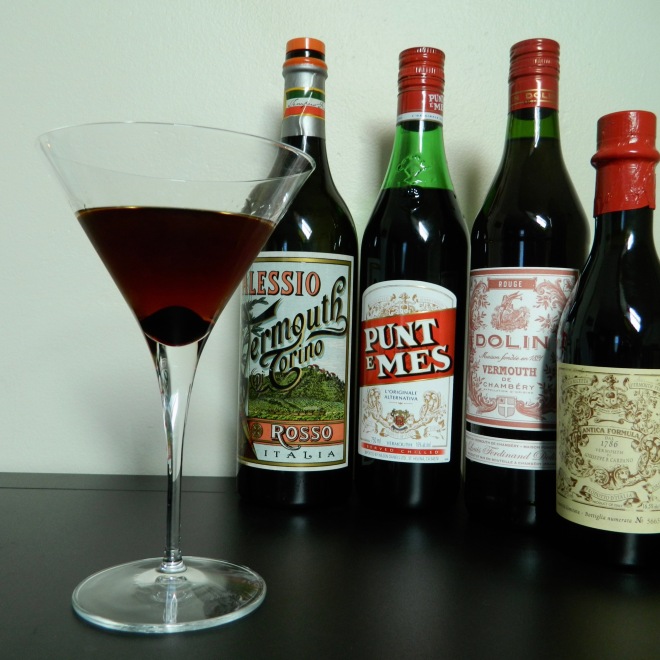 Probably the most ubiquitous sweet vermouth on the market. I really dislike it — it doesn’t have the mouthfeel or the aroma that the other bottles do, and doesn’t stand up in a cocktail. Sorry, Martini, but this one will be languoring in the back of my fridge.

Lots of herbal spice on the nose, but not as velvety or viscous as Carpano or even the Alessio. I wouldn’t even call it a “budget” option, just a good bottle to have around.